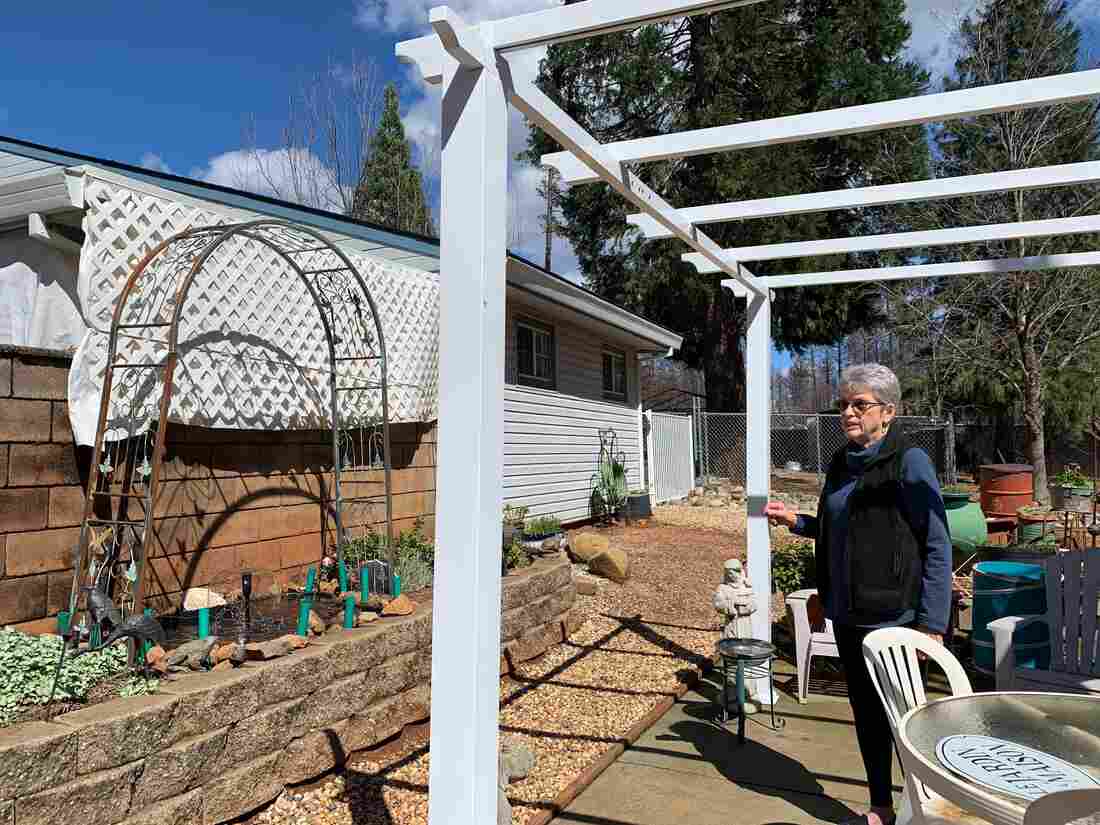 Pat Zinn’s home survived the Camp Fire. She moved back in a few months ago despite warnings that the water supply could be contaminated. She says her goldfish survived the fire and are still thriving in the water coming through the taps. 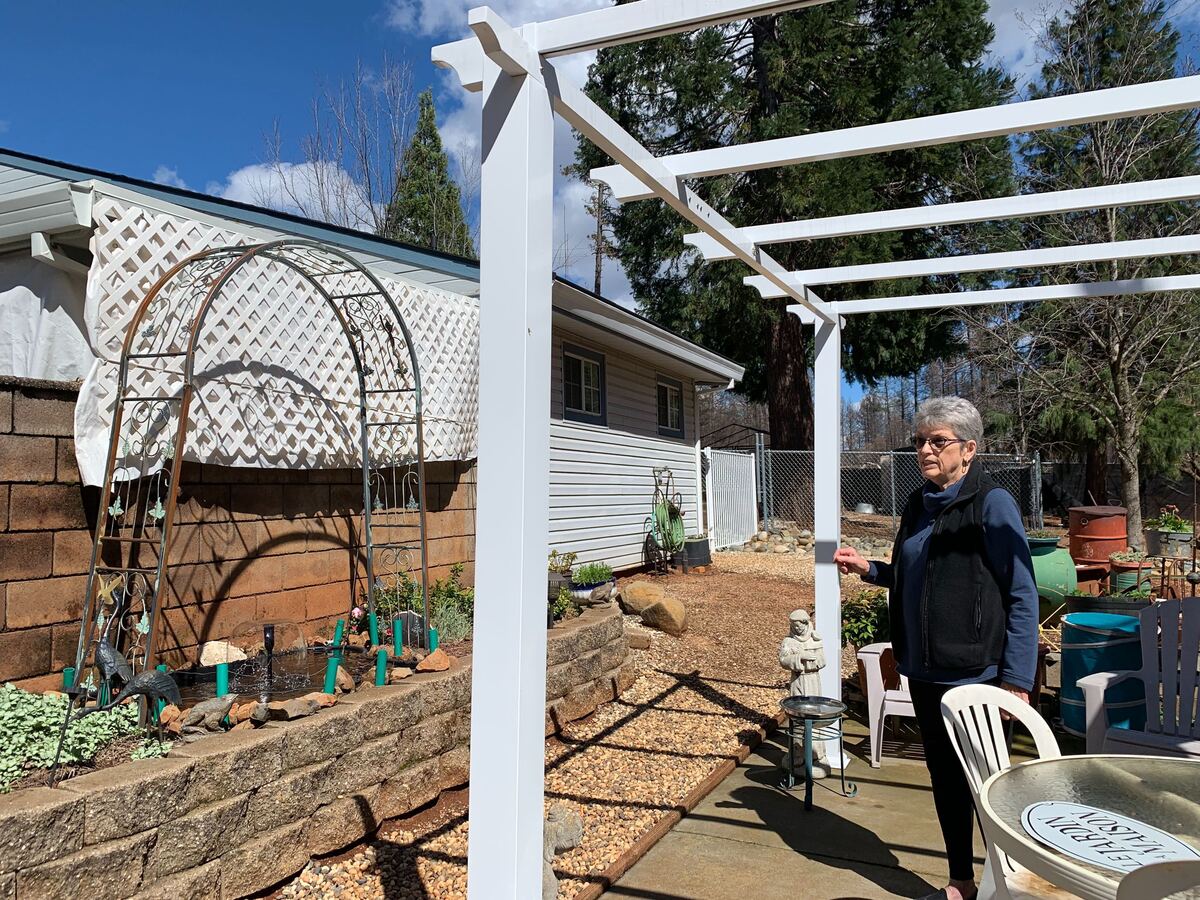 Pat Zinn’s home survived the Camp Fire. She moved back in a few months ago despite warnings that the water supply could be contaminated. She says her goldfish survived the fire and are still thriving in the water coming through the taps.

Six months after the deadliest and most destructive wildfire in California history, the town of Paradise remains a disaster zone. Only 6 percent of the debris from last November’s Camp Fire has been hauled away. Burned out skeletons of cars, piles of toxic rubble and blackened old-growth pine trees can still be seen everywhere.

Before the wildfire, the population of Paradise was about 26,000. Today, it’s in the hundreds.

The extent of the latest crisis unfolding in Paradise is yet unknown: The deadly fire may also have contaminated up to 173 miles of pipeline in the town’s water system with cancer-causing benzene and other volatile organic compounds, or VOCs. Preliminary results have shown contamination in about a third of the lines tested, though only about 2 percent of the entire system has been sampled.

Still, the water crisis is just the latest setback that has called into question whether the town was ready to reopen.

And some have had no choice but to move back.

“As soon as the house was cleaned, our insurance company told us that we had to come home,” says Kyla Awalt.

Awalt’s home off Bille Road is the only one still eerily standing in the rubble of what used to be her neighborhood. Her family had planned to move back, eventually. In January, though, they were notified that their “additional living expenses” had run out. But there was no potable water in town then, nor is there today.

They considered selling. But how do you put a home on the market if it doesn’t have any water?

“You can’t,” Awalt says. “That’s part of the inspection process.”

So they bought a huge water tank, out of pocket, for $6,500. It’s sitting beneath the shade of an old walnut tree along the fence line of her property. On the other side of the fence is the rubble of what used to be her neighbor’s home. There are piles of debris and a couple of mangled, burnt lawn mowers waiting to be hauled away.

The Awalts spend $250 to fill the water tank every few weeks. It’s expensive, but it’s peace of mind.

“It’s kind of up to the homeowner,” Awalt says. “It’s on them to figure it out.”

Before the Camp Fire, Paradise was known as a bedroom community as well as an affordable haven for retirees. Much of the population tended to skew lower income, and the idea that they’re now being left to fend for themselves is alarming to experts like Andrew Whelton.

“That’s not protecting public health,” says Whelton, a civil engineer who built his career advising the U.S. military on how to restore water infrastructure after disasters. “That’s not what we’re supposed to be doing with a population that has gone under trauma like this; we’re supposed to help them.”

Whelton, now at Purdue University, has recently been consulting with the town’s primary water supplier, the Paradise Irrigation District. The utility is trying to pinpoint the source of the contamination, whether it’s from burnt plastic pipes and meters or from the toxic waste from burnt structures that was flushed into the town’s water pipes. Much of the town’s housing stock was older and didn’t have back-flow protection.

“The scale of the recovery effort and the testing that’s needed in my experience here will be unprecedented,” Whelton says.

It’s likely unprecedented, but it’s also a warning to other cities in high risk wildfire zones.

The district’s manager, Kevin Phillips, says his staff is overwhelmed.

“There is no playbook for a wildfire that destroys a town and you have a depressurization of a system that creates contamination,” Phillips says.

There are 10,500 service lines in the district’s system, which was built in the 1950s and already had a reputation of being outdated and haphazardly designed. Phillips says the plan is to prioritize testing in neighborhoods where homes are still standing and to shut down and isolate the contaminated places.

The system will take years to fix. The testing alone could take more than two years.

“We feel like we are under the microscope of the nation right now, that we are going to be the reason why the town doesn’t rebuild. … If there’s no water, there’s no town,” Phillips says.

But Phillips says they won’t do anything hastily that would jeopardize public health. As more people try to move back, the utility hopes to buy and deliver tanks with potable water — a program will hopefully begin later this month. But no one knows yet who will pay for that.

Whelton worries that means folks living here will continue to be exposed to yet unknown risks. 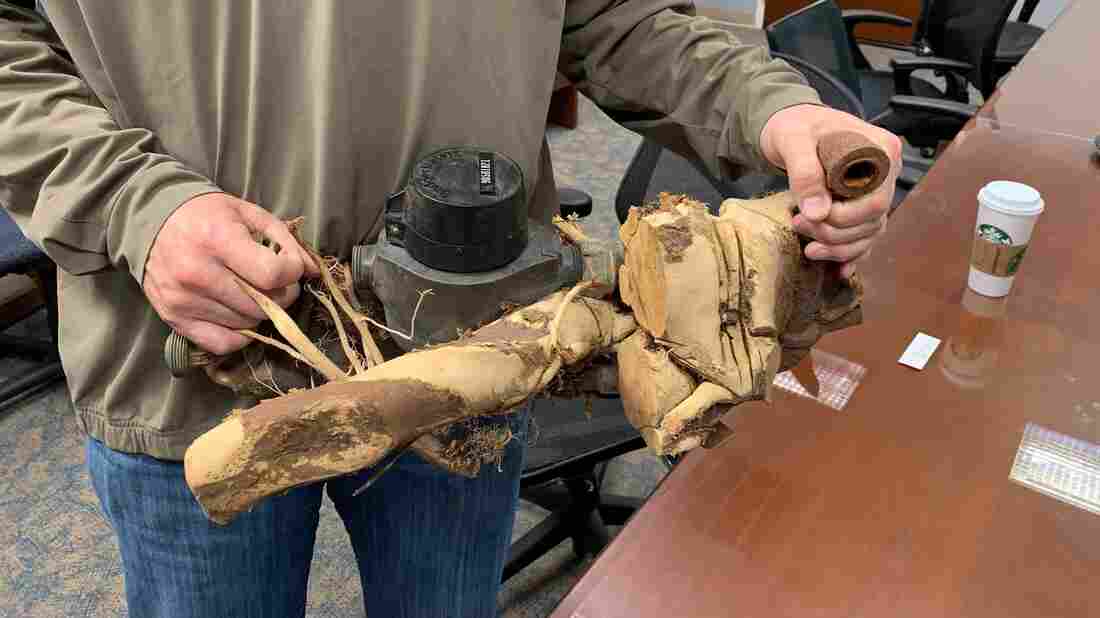 Paradise Irrigation District manager Kevin Phillips shows a sample of the town’s water pipes, which were frequently woven between underground root systems that were likely burned during the fire. 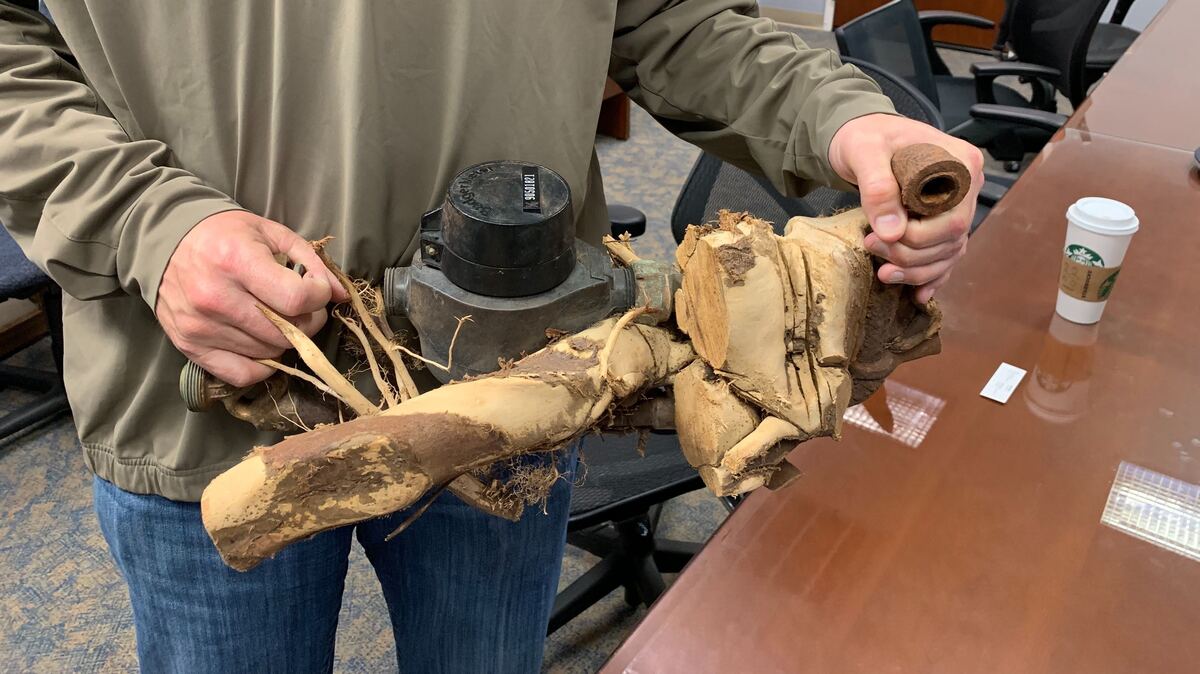 Paradise Irrigation District manager Kevin Phillips shows a sample of the town’s water pipes, which were frequently woven between underground root systems that were likely burned during the fire.

“In a disaster of this scale, that is one of the takeaways here,” he says. “In the absence of any credible authority providing help to a population, they will do what it takes to survive.”

For now, there are strict warnings that people moving back in should not drink or even boil the water, let alone use it for any household activity unless it has been tested. Whelton says some residents are buying water filtration systems that aren’t proven to be safe enough to handle the high VOC readings, or they’re relying on a single-point-in-time test for contaminants.

Seventy-nine-year-old Pat Zinn, whose home of four decades was spared, got her water tested three months ago. It showed the all clear.

“They did say it could change so I should have it retested, but it’s $100 every time you have it tested, so I guess I’m gambling,” Zinn says.

Zinn is drinking the free bottled water, but she’s using tap water for most everything else.

“Something’s going to get me one of these days anyway,” Zinn says. “So I’m not really that concerned about it.”

She chuckles as she tries to make light of the latest setback in front of her town’s recovery. She’s mostly concerned about Paradise’s survival, which she says hinges on its water crisis being solved.

“That’s the big thing,” she says. “If we don’t have that taken care of the town is going to die.”