Chuma Okeke was helped off the court Friday night and into the bowels of Sprint Center, and with him limped off Auburn’s best chance at a run to the Final Four.

Okeke, the Tigers’ reluctant superstar, sustained a left knee injury late in the second half of Auburn’s 97-80 win against top-seeded UNC in the Sweet 16. The extent of the injury was not known late Friday night, but coach Bruce Pearl said they “think it’s serious” and that Okeke would undergo an MRI on Saturday.

Okeke is expected to miss the Elite Eight against second-seeded Kentucky on Sunday (1:20 p.m. CT on CBS), and he could be out longer depending on the severity of the injury. Regardless, it puts Auburn in a tough spot amid the deepest NCAA Tournament run in program history, as the team’s best player is relegated to the role of spectator.

“He’s one of our best players, if not our best player, on the court at all time with his defensive and offensive presence, so losing a guy like him definitely hurts,” center Anfernee McLemore said. “Right now, we got to think next-man-up and keep winning for him, because we knew he wouldn’t want us just moping around right now.”

It’s a large void to fill, to be sure, for Auburn. Okeke — who had 20 points and 11 rebounds against UNC at the time of his injury — averages 12 points and a team-leading 6.8 rebounds while playing upward of 29 minutes per game.

While he doesn’t lead Auburn in scoring, often deferring to Bryce Brown and Jared Harper, he is the team’s best all-around player — a versatile offensive weapon shooting at a 38.7 percent clip from 3-point range and one of the best defensive players in the SEC — and the program’s most promising pro prospect.

“He’s got a future in the NBA,” Pearl said. “He absolutely was planning on testing the waters this year and had a chance to get drafted in the first round. That’s how good he is.”

Auburn players were “heartbroken” about Okeke’s injury after the game, but the Tigers were resolute, knowing they have unfinished business to tend to as they continue to chase history. So, with a familiar foe in Kentucky standing between Auburn and its first-ever trip to the Final Four, how do the Tigers plan to cope with the loss of their promising young star?

The refrain that was echoed throughout the locker room Friday night was modest: Next man up.

It’s a somewhat familiar situation for Auburn, which late last season dealt with the loss of McLemore following a gruesome leg injury against South Carolina. While that loss derailed Auburn’s postseason hopes, Pearl was more optimistic about his team’s ability to compete without Okeke simply because of the Tigers’ improved depth. Whereas last season Auburn was in “survival mode” while shorthanded in the postseason, this time around Pearl feels confident in the remaining nine players in the team’s rotation and, specifically, the four-man frontcourt.

That will come into play against the Wildcats, with backups Spencer, Wiley and Purifoy all being thrust into more prominent roles — and one of them, Spencer or Purifoy, expected to be inserted into the starting lineup at the four-spot.

Purifoy was by far the most effective of that foursome against UNC. He scored 12 points, all during a 5 ½-minute span in the second half, on 4-of-6 shooting from beyond the arc. Purifoy also played aggressive defensively, pulled down two rebounds and added an assist in 12 minutes off the bench.

“That’s a great stretch for anybody to do against North Carolina,” guard Samir Doughty said. “That’s tough, but he stepped up in the moment.” 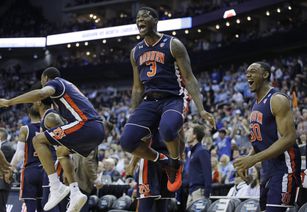 Danjel Purifoy’s role just got a lot bigger for Auburn, and he stepped up

Purifoy scored 12 points on 4-of-6 shooting.

It was the best stretch of basketball from Purifoy since his freshman season and a shooting display he ranked behind only his 27-point performance (with 4-of-7 from deep) against Boston College in Madison Square Garden in 2016. He has not played more than 20 minutes in a game this season, reaching that mark only once since his return from an NCAA suspension, but his role should expand further with Okeke sidelined.

Since his return from a lower-right leg injury earlier this month, Wiley has not logged more than 13 minutes in a game. He played six minutes against UNC, finishing with one point, five rebounds and a block while helping Auburn largely keep pace with the Tar Heels on the glass.

“Without Chuma, it’s going to be tough,” Harper said, “but I think we’re going to be able to pick our areas.”

The loss of Okeke dealt a considerable blow to Auburn’s Final Four chances. The Tigers, who have been the hottest team in the country and own the nation’s longest active win streak at 11 games, opened as 2.5-point underdogs against the Wildcats.

Yet while the odds are against them, the Tigers’ confidence heading into the Elite Eight is not wavering. They just take this adversity — that feeling of being “underestimated” and disrespected — and try to turn it into a catalyst.

“I just think it gives us another extra motivation,” Harper said. “I think coming to this game (against UNC) — not that we were necessarily looking at the stuff; we were counted out — we were supposed to lose by double-digits and people just thought we didn’t have the firepower, the depth, blah, blah, blah, blah, blah, blah, all that stuff. We don’t let it affect us too much.

“That’s just another motivation for us to go out, but with Chuma probably being out, that’s going to be an even extra motivation, so I know we’re going to be ready.”